So much incredible stuff happens across an AFL weekend. It’s impossible to keep up with it all. The Onballers crew – and some of our friends – are here to bring you a view on the stuff you saw and other gear you might have missed. This is the Onballers Quick Hands, our round in review.

Operation Star Treatment has its work cut out for it

Most times these days, that results in a suspension. Some kind soul has put together a portfolio of recent dangerous tackle incidents in GIF form, to simultaneously provide clarity and stoke the inevitable outrage when the Match Review Panel hand down their decision. Here they are below.

And now for today’s exhibit…

But this could impact the Brownlow. We could have a winner be suspended for the first time in 20 years! And everyone knows that stars get treated differently, don’t they?

This could probably be analysed statistically, but let’s assume that members of the Match Review Panel are partial and fallible and will be looking to – within the margins of protocol and plausibility – give Dangerfield the special Brownlow favourite treatment to avoid rocking the boat. How would they save Dangerfield?

Here’s the thing. Dangerous tackles can’t readily be fiddled into a fine – it’s either a suspension or no case to answer. Operation Star Treatment will be very difficult to apply here. Ordinary reportable offences such as strikes, bumps and rough conduct have three elements – intent, contact location, force of impact. They assemble into a table from which sanctions are applied. The table for 2017 can be found here: 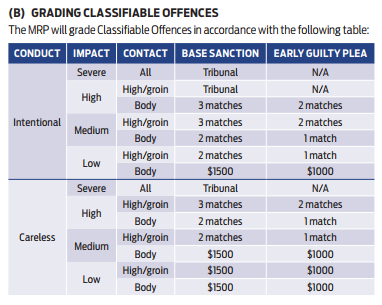 This is a rough conduct charge. Of the three grading elements, two are inarguable, binding the MRP in its flexibility.

Intent: If the tackle is an offence, it’s careless intent. Careless is the lesser intent grading. There’s also accidental, which is below the reportable threshold for intent and would mean there’s no case to answer. But it’s hard to see that happening

Contact: It’s head-high contact. High contact is inarguable because his head hit the ground, concussing him. This is how the Gibbs, McCarthy, Stevens and Waite tackles were all graded.

How to save Dangerfield?
Strikes are easy to argue away with classification trickery, and a lot of bumps get excused as reasonable attempts to contest the ball. A concussive rough conduct charge for a dangerous tackle is the worst case scenario for the conspiracy to protect the Brownlow from another Chris Grant/Corey McKernan situation.

The lack of flexibility in gradings of intent and contact location ties the MRP’s hands in using marginally plausible classifications to let Dangerfield off with a fine. To avoid the suspension they’re going to have to assess the matter and conclude he has no case to answer at all.

To give the fine, they’re going to have to deny that a concussion is, at least, medium impact to the head. Surely that will be a bridge too far even for a the conspiratorial panel we are assuming exists.

This means the three-person panel of expert legal and football minds and also Jimmy Bartel are going to have to claim that the motion was not a dangerous tackle at all. They’ll need to say it was a reasonable attempt to tackle, or not excessive force, or just plain accidental conduct.

We love r/AFL at Onballers, so much that we force feed our columns down its digital tube on a daily basis. As a collective the posters over there are the sharpest football following minds in the country, and we think you should get in on the act. Starting this week we’ll be picking out a call that made us feel things. Without further ado…

A moment of clarity

Ryan Buckland: Saturday’s twilight fixture between Port Adelaide and St Kilda was the worst kind of football – a terrible tasting pea soup of wet weather, skill errors, caveman tactics, and low scoring. It also contained one of the purest exhibitions of professional Australian rules football we have witnessed in 2017.

Here’s the scene. St Kilda lead Port Adelaide by four points with three minutes left on the clock. The Saints execute a precise 45 degree kick based attack through the centre square which culminates in a successful Tim Membrey set shot for goal. The lead is 10 points with nary more than two minutes of game time remaining. The already half empty Adelaide Oval loses half its patrons again in the proceeding minute of play as it looks like the Saints are home. Stoppage after stoppage eats up the clock, halts Port’s only real avenue to goal: a switch to the open side.

With 80 seconds left, the Saints turn the ball over to the Power on their half forward line, and Port manage to execute a switch. After some consternation, Aaron Young goals. Four points, 54 seconds. The streams of teal exiting the stands run dry.

Port Adelaide win the centre clearance, and Brad Ebert miraculously strikes the ball in mid air on the edge of the square right to the waiting arms of a (unmarked) Jared Polec. His delivery is precise, but Nathan Brown’s defence is better. The ball squirts inboard, Ollie Wines nearly kills a man trying to gather it, and a stoppage ensues.

St Kilda has approximately 35 men stationed within 10 metres of the play. Port Adelaide has its press firmly in place. The ball is not leaving the Power’s front half. Patrick Ryder wins the tap, but no one is home. St Kilda gather the ball and feed it back to Jake Carlisle – one of three men guarding the goal mouth – who slams the ball onto his boot like he’s just been handed a bag of dog shit.

It travels 60 metres, towards the boundary. The crowd rises with the players. All eyes on the man in yellow, who pauses for effect. It’s a throw in, with 19 seconds on the clock. It should not be a throw in – but then again neither should two other blatant deliberate out of bounds no-calls from earlier in the quarter. But it’s a throw in. Fortunately, it’s a throw in, because this happened.

Ryder creates the space on the ground, rises to his apex, and strikes the ball deftly at the highest possible point. It is perfect, in the literal sense. Ryder could not have executed his skill any better. He hits a bursting Robbie Gray, who lost his man (Seb Ross) by coming around the back of the ruck. Gray takes two strides before realising this is his kick. He is not afraid.

The Port Adelaide fans who left with those precious two minutes to go missed the whole game. No one will remember this dreary exhibit in two months time. They will remember Ryder to Gray for the winning goal.

North Melbourne forgot how to tank

Adrian Polykandrites (@NABFW): When people look back at the games that defined the bat-shit crazy season that is 2017, it’s unlikely that North Melbourne’s four-point round-19 win will jump out as anything special, but for the Roos, it could well be.

It would have been easy for the Kangas to roll over and put the rest of the season in the too-hard basket after seven-straight losses, but North Melbourne still give a crap, and so instead they scrapped and fought and maintained the rage against a superior opponent when even the elements were against them.

This wasn’t some half-arsed late-season win against a disinterested cellar-dwellar, beating the Demons in a game that really mattered and the feeling that came with it will stick with Jy Simpkin and Sam Durdin and Declan Mountford and Ryan Clarke and every other young Kangaroo for some time yet.

If the cost of beating Melbourne for the 17th time on the trot is pick four instead of pick one, then it’s a price worth paying.

Those Giants are Trash

Jay Croucher: The Giants are not good at football. They are intermittently extraordinary, but they are not good. On Saturday afternoon, in perfect conditions with a near-full complement of players, the Giants finally committed to the meltdown that had been building for six weeks. They chipped it into the corridor to contests, they missed goals from the goal-square, and they just generally did things that shit football teams do.

They are a team without a plan. In the first half they dominated contested ball and clearances, and yet lost the inside 50 count to a vastly inferior team. This cannot happen, and Leon Cameron is the worst coach in the league. His players are clueless, and with the corridor taken away from them they are nothing – kids sitting an exam with nothing to rely on but their good looks.

They pulled the game from the fire, because that’s what they do. But three of their last four games are against Melbourne, the Bulldogs at Etihad, and Geelong at Simonds. Unless they change – unless they discover the concepts of ‘hard-work’ and ‘intelligence’ – quickly, the most talented team in the competition will have to settle for being the most disgraceful.

The draw that should not be

Buckland: In the 18 and a half seasons that Champion Data has been collecting its contested possession statistic, just 17 times has a team had 50 or more than their opponent in a single game. Collingwood did this yesterday, beating up Adelaide around the ball on their way to a half century contested possession differential. That makes 18.

The average margin in those 17 games prior to yesterday? 83 points. 16 of the 17 long tail contested possession outcomes coincided with victories to the team laying the ground ball smackdown down. Just one, the 2008 Richmond Tigers (against St Kilda in Round 7) lost, and the Tigers had two opportunities to win the game. The Pies drew with the Crows. Collingwood just keep finding ways to do calamitous football things in 2017.

Good news: Daniel Wells is doing exactly what he is supposed to do. Bad news: pretty much everything else.