Writer’s note: Before we get to the takes, my sincere apologies for a month-long absence from Onballers.com. I can explain.

I was just this week discharged from the Burns Ward of football media hospital. For those who missed it, I was roasted by shock jock football media maven Kane Cornes (if you’re Googling your name Kane, welcome to alternative football media blog Onballers.com) on his Friday radio segment “Mean Tweets”.

I’m not going to lie, I was a little bemused at first, because:

But then after reflecting on the matter while splayed on my hospital bed, with nothing but my thoughts to keep me company, I realised I was merely fodder for an awfully unoriginal radio segment, merely confirming the sentiments Mr Cornes so railed against.

Anyway, as the last tweet Mr Cornes read out I’m certain that means my tweet was the best one. And chicks dig scars.

By the time we get to the end of the season, the All Australian team generally picks itself. It’s so boring, and everyone has their opinion, but it ultimately becomes a game of which shade of grey the writer is partial to. It’s still grey.

It is so passé I don’t bother to pick an All Australian team come the end of the season. I pick the Nathan Jones All Stars instead – a team made up of players that didn’t make the All Australian squad but who are worthy of recognition one way or another.

But an in-line running All Australian team? That gets the juices flowing. We’re talking about small sample size and schedule-influenced performances. It’s great. At least I think it is, because this is the first time I’ve sat down to really think about what a part-year  All Australian team could or should look like.

First, some rules. Availability matters: play any less than six games through nine rounds (which pro-rates out to about 16 games in a 22 game season) and you are ineligible. The team should be mostly made up of the best players, but I also pick a team that reflects the state of the league. That means two tall forwards, one ruckman, and back six players that add drive as well as stopping power. We’re driven by impact and context, not just who has the highest metres gained or disposal count or goals kicked. That said, the chaps leading these respective categories make it in.

Finally, we can interpret this as the team which currently owns the 22 All Australian team spots, meaning they will have to drop away or someone else come from outside of the team to knock them out. You know what that means? We’ll be back against after Round 16. Trite? Oh yes. 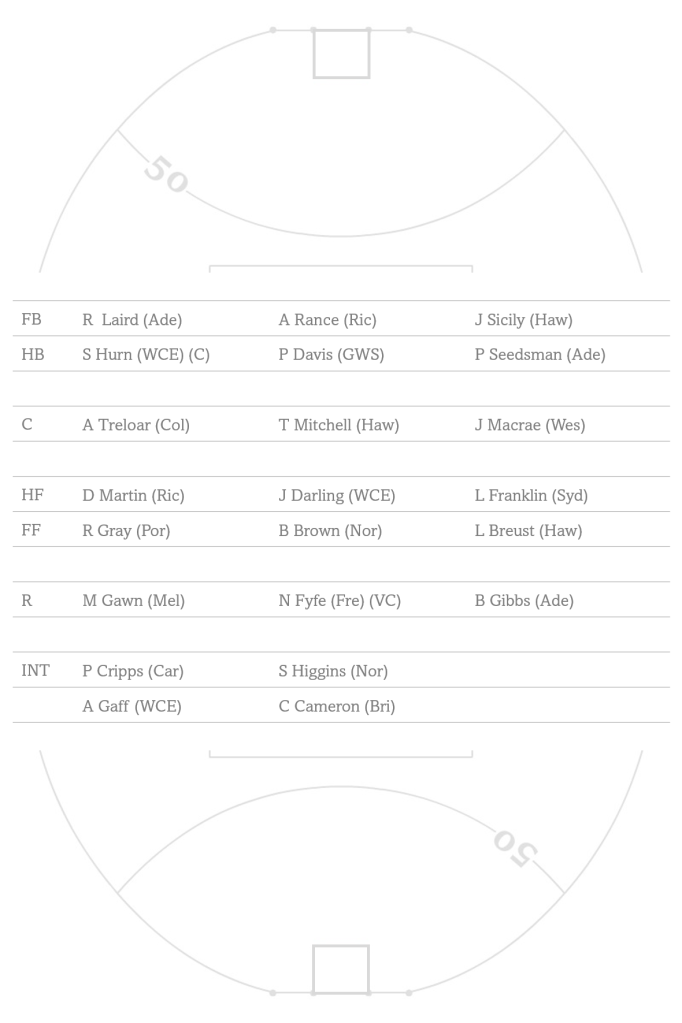 There are a bunch of obvious selections. Four of the starting five midfielders pick themselves: Nat Fyfe (two time Brownlow medallist), Tom Mitchell (increasing his direct influence), Bryce Gibbs (career best year) and Jack Macrae. While no of the quartet are on top four teams, their influence on the teams they do play for is abundantly clear. Patrick Cripps gets the first bench spot but could have pinched Gibbs’ spot were it not for the presence of Fyfe and Mitchell in the starting line up – where would the Blues be without him this year?

Macrae in particular deserves an extra mention for the way he’s taken his play to this All Australian level in 2018. After bulking up a little over the summer, Macrae has added accumulation to his skillset which already included high quality disposal and strong endurance.

Alex Rance is the obvious full back choice in a qualitative sense. But when you examine his advanced defensive metrics, courtesy of AFL Stats Pro, the case is watertight. Rance has been involved in 53 defensive one on ones in 2018 (number one in the league for regular players), losing just nine of them (a loss rate of 17 per cent, ranked ninth but with significantly more volume than those above him). He’s taken 3.8 intercept marks per game, and executed seven spoils per game, both rated as “elite” in this category (whatever that means). To cap it off he’s averaging 2.2 score launches per game, an extraordinarily high number for anyone let alone a number one key defender.

The other key defensive post is a much more challenging selection. More on that in a moment.

The forward line is more or less uncontroversial from top to bottom.

Ben Brown and Jack Darling are surely the consensus tall forward combination through nine rounds. And what a season for both of them. Brown has emerged as the best traditional big man in the competition, with lead-craft and herculean strength in the contest. Darling has been a marking machine in almost every situation and part of the ground forward of centre; his kicking has been somewhat streaky but as it stands he’s on track for 68 goals, far and away the most he’s kicked in his career.

Dustin Martin is in notionally on the right forward flank, but we know most teams don’t play six forwards these days. Besides, Martin has been living forward of the play for most of the year: a 63-37 forward-back split for his possessions confirms this. Don’t be fooled by the lower possession count: Martin is leading the league in score involvements with 8.9 per game.

On the other flank is Lance Franklin, who scrapes in on games played but otherwise is one of the lockiest selections in this team. Franklin is leading the league in goals per game (3.5, ahead of Brown on 3.4). When he’s played so much of Sydney’s offence – which would be fourth in the league in points per game, and number one when adjusted for schedule, in the six games Franklin has played – has flowed through him.

Including him with Brown and Darling makes the forward line taller than most in the league this year. But given his skill set and tendency to do his best work further up the field, the problems that come from being too tall in today’s competition shouldn’t accrue.

Robbie Gray fills the final spot in the forward line, as the notional small forward. This is a nod to the fact there hasn’t been a stand out “small forward” in 2018 – honestly, look for yourself – and that Gray still does his best work snaking his way around packs in forward 50 stoppages. There was a temptation to sneak Chad Wingard into this position, but Gray wins with the flexibility he affords the rest of the team where selections are more obvious.

Gray is perhaps the least controversial of the controversial selections. Next cab off the rank is Adam Treloar from Collingwood, who gets a wing position on account of his improved kicking and role in the Pies’ transition game.

Treloar has been a bit empty calories throughout his career. Not so in 2018. He’s a bit of randomness away from averaging 30 disposals and a goal a game, and is averaging five clearances, five inside 50s and five tackles. Add to that his 6.9 score involvements per game, and he joins Macrae in the attacking midfield role.

Paul Seedsman and Shannon Hurn are giving me drive a kick behind the play, the former with a bias for attack and the latter defence. Hurn has Benjamin Button’d his way back to the early 2010s, and is launching 50 metre bombs to advantage with a striking regularity. Seedsman is doing more of his work with his legs on the ground, keeping Brodie Smith’s seat warm as the defensive half link man. He’s also gathering his own ball, with 7.2 ground ball gets per game – an enormous number for someone not playing inside midfield.

Rory Laird and James Sicily are helping in the defensive half, with Laird giving me another midfield rotation in addition to his Hoover vacuum D50 sweeping abilities. Sicily is the flex defender that can rotate onto a smaller player and come third man up, as well as setting up attacking thrusts the other way with his aggressive kicking.

Sicily gets the nod for a position that could be filled by any number of worthy contenders. Jeremy Howe, Jeremy McGovern (don’t be fooled by the sticker, he’s more like Howe than Rance), Michael Hurley and Scott Thompson (perhaps the harshest call given North is the stingiest team in the competition). In the end his aggressive streak and deft touch are skills I cannot look past for this kind of role in 2018.

Phil Davis is my centre half back. McGovern could’ve been here, but the fact there is so much aerial stopping power means I need someone with a more well rounded skill set. Davis fills that role, rating higher than McGovern on defensive half pressure acts (Richard Hinds’ favourite statistic) and spoils, and having a better one on one contest loss rate. By the end of the year this could certainly flip but through nine rounds Davis gets the nod.

Finally, the bench. This is a complete crapshoot, and there’s not much more to say. Cripps gets squeezed out of the starting line up despite literally carrying Carlton on his enormous back. Andrew Gaff is having a career best year after being given some extra work on the inside. Shaun Higgins is also having a career best year, playing a little higher up the ground with North channelling their transition through him.

Finally, the leading goal kicker from the most exciting team in the competition Charlie Cameron gets the last spot on the bench, because he’s awesome and this is my team. Cameron has had a huge year as a scoring threat for the Lions, and can flex all across the ground.

That was fun. Let’s do it again in a couple of months.