West Coast’s season will end on Saturday afternoon in the west of Sydney, but not without an almighty effort to avoid it by one man: key forward, superstar, the great hope of the west Josh Kennedy.

Kennedy, the diamond-encrusted steak knives sent by Carlton as part compensation for the loss of Chris Judd, has been the Eagles’ most influential and important player in 2017 in the stead of Nic Naitanui. He missed five games between Round 11 and Round 17 due to a mystery calf and/or Achilles tendon injury, and was logically written out of contention for his third straight Coleman medal.

That slight didn’t bother the goal kicking dynamo, who has gone about his business as he knows how, and now holds a one goal lead over Essendon’s Joe Daniher with two games remaining. Sydney’s Lance Franklin is third a further three majors back, with North Melbourne’s Ben Brown – the darling of punters just a fortnight ago – seemingly out of the race with half a dozen fewer goals than Kennedy.

This year’s Coleman medal count has been a fascination, if only because of Kennedy’s long term (in the scheme of an award like this) absence. He was in front, then the chasing pack caught him, then he’s pulled some Lance Armstrong shit and surged home in the final stage of the race. 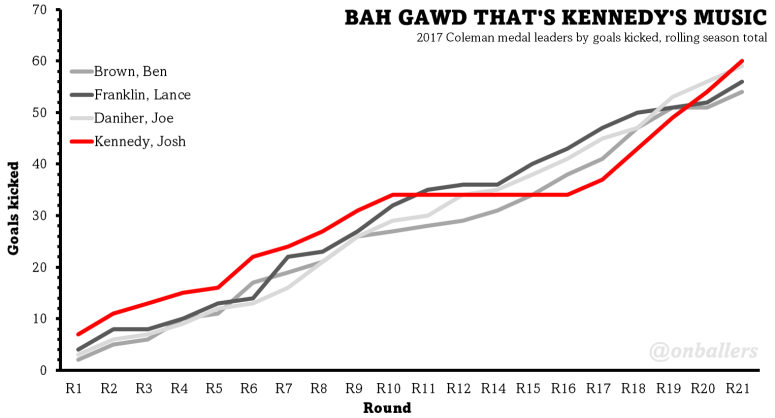 In many ways, Kennedy’s 2017 campaign is more impressive than his last two Coleman medal-winning seasons. If we look at his goal kicking output on a per-game basis, Kennedy’s current year sticks out above the rest. He’s currently rolling at a cool 4.0 goals kicked per game – half a game above more than he’s booted at the same stage the past two season.

Indeed, Kennedy has created for himself the opportunity to be the first player to kick four goals a game over a season since Franklin (113 goals in 25 games) and Brendon Fevola (99 in 22) did it in 2008. He could be the last with the way the football world is headed.

And yet, he might not make the All Australian team. This would be a travesty and not just because I am a massive homer West Coast fan. The All Australian team has become a de-facto individual honour in recent years, with the “structure” of the team becoming less important by the year. Some people seem to think Essendon’s Joe Daniher, Sydney’s Lance Franklin and North Melbourne’s Ben Brown are more deserving of a place. I’ve even seen some people boosting the case of Adelaide’s Taylor Walker.

Balderdash! Josh Kennedy is the All Australian full forward, and here is every argument that could possibly be mounted against him filling that spot debunked. Strawman? What strawman.

He only kicks goals!

Sorry, what is a key forward supposed to do? Oh yes, kick goals. Kennedy is the last of the true stay at home key forwards, rarely leaving the forward 50 arc and barely touching the ball behind centre (63% of Kennedy’s possessions occur inside forward 50 – surely a league-leading mark).

Admittedly, this is where Franklin pips Kennedy one of the forward spots given what Buddy brings to the table in addition to his direct scoring. Franklin bests Kennedy on score involvements (9.1 vs 8.7), inside 50 entries facilitated (5.3 vs 1.5) and direct defensive pressure applied via tackles (2.4 vs 1.5). But Franklin is an alien, not a footballer; Franklin plays his own position, and it’s not full forward.

He has played on a better team!

Better than North Melbourne perhaps. But in case you missed it, West Coast are terrible this year. The Eagles are in eighth spot on 11 wins, but if we adjust their win total for their underlying performance (points for and against, tweaked to take into account their strength of schedule and close game performance), West Coast have also been worse than Essendon.

West Coast has averaged just 50.9 inside 50 entries per game this year, fewer than Sydney (53.7), North Melbourne (51.7) and Essendon (51.5). That’s not a huge difference, but every little bit counts when you’re shredding a strawman right?

If you think Kennedy’s forward line craft is boring then I don’t think you’re allowed to watch another game of football. He’s a unique specimen, preferring the art of the lead to the stand and deliver stylings of his contemporaries. Kennedy has taken 4.1 marks inside 50 per game, well above Brown (2.95), Daniher (2.8) and Franklin (2.55). Yes he’s been picked before, but that shouldn’t preclude him from being picked again given what we’ve seen from him this season.

This is the worst argument of the lot. That Kennedy returned from what loomed for a while as a season-ending lower leg injury to draw level with and probably best his key forward opponents in the goal kicking stakes is in my mind the strongest argument that can be mounted for his candidacy. Assuming Kennedy plays in West Coast’s final two games of the season, he’ll have played 17 games in total – more than enough to prove he’s the best key forward in the game.

So please, don’t be stupid, and make Josh Kennedy the first man you pick in your mock All Australian squad some time over the next two weeks. I need this. I really need this.